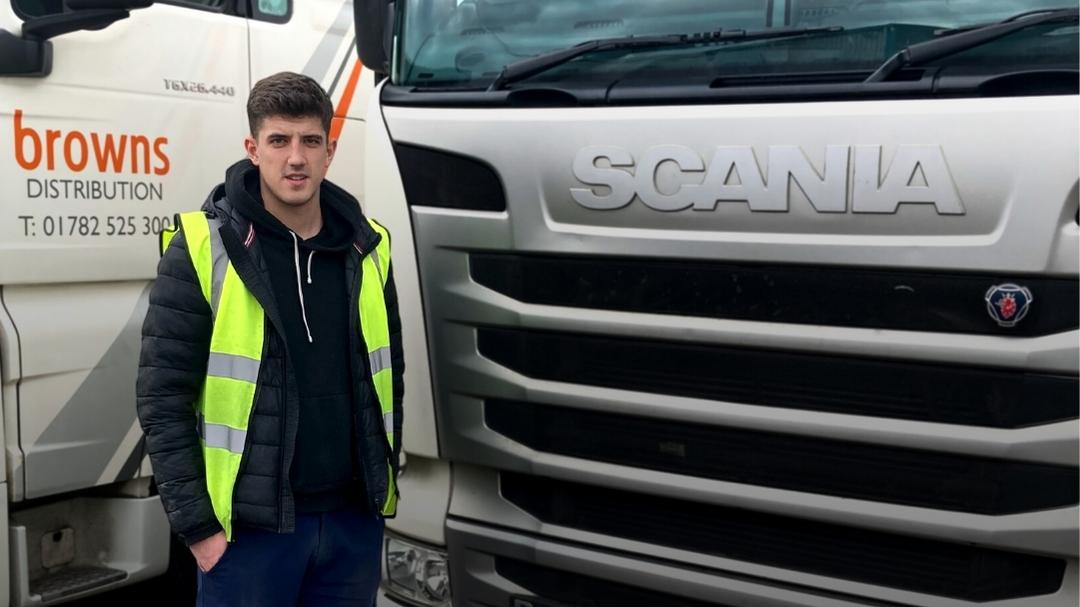 Oskar joined the Browns in early October, spending his first few weeks in the warehouse performing basic duties, including packing pallets as part of our pallet and wrap service.

After sitting down with Oskar, who was kind enough to share his journey and aspirations with us, we learned more about his passion for HGV driving.

Mark Knapper, Driver Welfare & Training Manager at Browns Distribution, said, "It was clear to me at the open day that Oskar was really driven to become a Class 1 driver, and I wanted to help him reach his goal."

Just two weeks after starting at Browns in the warehouse, we're delighted to hear that Oskar passed his HGV hazard perception and theory test so soon; both he and his Dad must be very proud.

Furthermore, Oskar revealed that he had previously worked at Screwfix carrying out duties in the warehouse, so warehouse work wasn't entirely out of the ordinary for him.

He went on to describe his experience working in the warehouse at Browns so far, ''I get on with everyone and it's a good environment to work in.

Next month, Oskar is due to take his CPC theory, followed by his Class 2 practical test and hopes, once he has gained experience as a Class 2 driver, to go for his Class 1 licence.

Mark added, ''Oskar had all his theory tests booked, and his enthusiasm and passion made him the ideal candidate to be the first driver to go through the program - he should be very proud of himself!"

Oskar was asked if he had any comments about his time at Browns since joining, he responded, ''Mark and Luke have been really supportive throughout my time here so far. Mark has given me lots of support, help and advice through my theory test and Luke's always checking that I'm doing ok in the warehouse.

According to our Driver Welfare & Training Manager, Oskar will move from the warehouse onto the van after a few weeks, and he will be paired with a mentor from our Class 2 fleet to learn the ropes.

Let us conclude by saying welcome to the team, Oskar, and good luck with your Class 2 practical test in November; we're keeping everything crossed for you!