Browns Distribution are happy to announce that David Brown Jnr was selected as Young Business Person of The Year at the Sentinel Business Awards on the 15th March. The accolade was awarded to David by the Sponsors, Stoke on Trent City Council. The award is open to entrants under the age of 40 and must be directly responsible for the success of their enterprise.

The event was held at The Kings Hall in Stoke on Trent with guest speaker Sarah Willingham who has recently appeared as a Dragon on Dragons Den.

The evening was a great success and it was very much noticeable that business in and around Staffordshire was on the up. The strapline for the night was "Local and Proud" and this was very much at the heart and mind of everyone who attended. 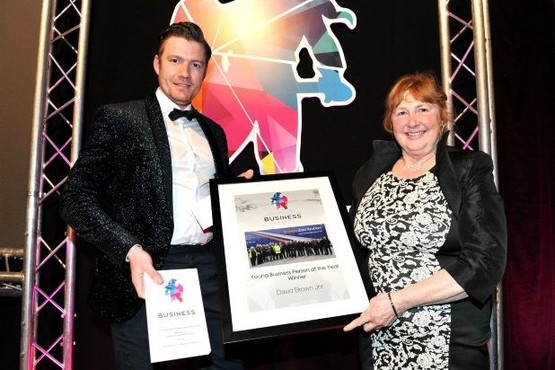 After collecting the prize David Said,

"The award demonstrates the commitment from the whole of the Browns Distribution Team as none of what we set out to do could have been achieved without each and every employees hard work and commitment. It has been a clear team effort and I'm very grateful we have been recognised." Commented David.

David has been working in the business since leaving school at 17 and has been the Manging Director for the past 5 years. Whilst working in the motor vehicle workshop he went onto complete a Business Management Degree part time at Manchester Metropolitan University. His passion for customer service stretches out across the 100 strong workforce which he believes is very much integral to their success today.

What's Next for Browns and the Team?

Browns Distribution now celebrating 60 years in business and with 20% year and year growth has some exciting plans for 2016. One of which is the expansion of their existing Warehousing and Storage facility. Browns are building a 30,000 sq ft warehouse on their existing site which will boast an additional 6600 pallet spaces in a state of the art facility. Browns currently store circa 10,000 pallets for clients and are at the forefront for storage and onward delivery. The new Warehouse will open in 2017.

Browns vigorously monitor KPIs to ensure customer satisfaction and they believe their high service offering is key to their success. Soon Browns will be rolling out a new Online Job Portal which will offer users even more control of the delivery cycle. The system is currently in testing and they are hopeful to roll it out before Summer.

The current financial year sees turnover in the region of £10 million and still growing. Recently winning some prestigious contracts although still hugely committed to the entire customer base. Browns has a customer base of over 500 companies of which the majority are Staffordshire based.

If you would like to talk to Browns about any further freight requirements please contact a member of the Customer Care Team who will be more than happy to help.